Ga naar de inhoud
Opmerkingen: First I did a vertical visibility reading from the surface with the big Secchi disk next to the Paviljoen. Sunset conditions are not according to protocol, but nonetheless I had 7,5 meters. I was just curious about it.

John and I first went searching for a suitable spot to make photographs according the “stick in the sand” principle. We need a fixed height and frame. That is pretty hard to find such a spot bearing in mind that certain markers may get overgrown by plants.
After taking the photos I took a water sample to find out what is actually causing the bad visibility. Under the microscope I did see very small parts floating around, but these disappear as soon as you put a glass cover on it.
A visit to the SETL plates showed us that the undersides of the plates aren’t affected by the brown yellow algae. That is of course the whole idea that this kind of growth doesn’t interfere with organisms, which want to settle such as mussels.
Ok it is getting rather boring, but it is visibility time with the Dutchi and small Secchi.
There is in fact a little water current coming from the northeast which drifts me away from the measuring point. The worse the visibility gets the less difference there is between Dutchi and Secchi. Finishing that, we head Northeast along the bottom at 11 mtr depth.
I pick up a yellow-brown loose algae and put it in my sample jar. A few meters further a fresh and luscious dot of algae catches my eye. It is attached to the bottom and this is a nice piece to check out under the microscope and later it turns out to be Spirogyra.
Another dot grows at 7 meter depth. It is getting rather nippy so we head back to the entry point. Again another piece of loose green algae has to be checked and I simply can’t help it.
My sample jars are full so a photo should do the trick to determine what it is. It looks like Gutweed.  I first noticed this in 2012 at 13th of may at a watertemp of 12 Celsius.
It disappeared on august 9th 2012 at a water temp of 21.8 Celsius.
So lets see what happens this year as the air pump will not run this year.

Brown algae is normal in some lakes, although last year we haven’t seen this growth before.
If you ask me the green algae is triggered by the amount of sunshine hours per day, rather than temperature. 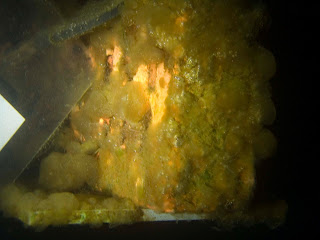 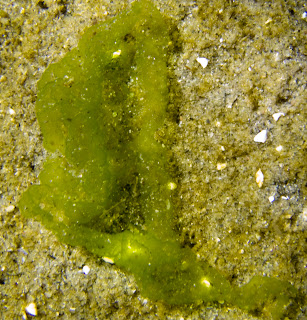 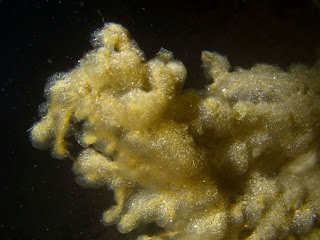