One of the visits was planned for december the 4th at Haarlemmermeersebos
So Ted organized this fun morning ending with a nice lunch at Papa’s Beach House. After that Spiegelpolderplas was planned and Cas Renooij would lead them around there.
Unfortunately not all volunteers could come, but anyway a nice team was waiting to meet them. Gery, John and I already retreived two SETL plates to show to everybody.
When the delegation arrived we gave them a warm welcome and offered coffee and cookies Dutchie style, because the temperature was a bit nippy.
You immediately hear Vanessa’s presence, where as Richie is a more docile person. They both are very enthousiastic and interested in our projects and could wait to get into the water to see for themselves.
Next a group photo. 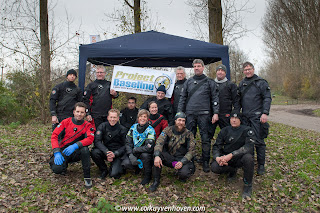 For this occaison we wanted our special photographer Cor and our special reporter Annet to document this special day. They both found the time to do so and did an exellent job, which gave Project Baseline an enormous publicity boost as the article appeared in many local newpapers in the province of South and North Holland.
First I told what Project Baseline Haarlemmermeer does and how special this place is. Ted took the liberty to do the actual briefing.
While most took to the water to start the dive, Vanessa had a little drygloves problem and so Richie had time enough to neatly tuck away his beautiful beard under his hood. During this time, most divers were already doing their chores underwater.
We didn’t mind at all, but Vanessa apologized many times. Richie checked his camera one more time and we took of. The mesmerizing schools of perch and a large pike gave a way a little show. This was Vanessa’s first semi overhead experience. Ofcourse I had to show the SETL plates. Cor took photo’s while we were looking at the plates. After that we went down the pile (not down the aisle mind you!) and swam towards the clayboulders at about 7-8 meters depth.
She wanted to feel the clay and as we swam along the clayboulders, Richie flew around with his filmcamera.
Very few plants are still at the bottom fighting 9 degrees water. I wonder how long they will last.
After 40 minutes the cold took over and we left the water for a quick cup of coffee and or tea.
Vanessa had now seen our measure stations with her own eyes, which she had only seen on photo before. Richie also was very enthousiastic about the dive.
Eventhough we were a little behind schedule everybody took the time for a great lunch at Papa’s Beach House where we all talked a lot.
After that we head out to Spiegelpolderplas and made a great dive there until darkness took over.
It was a great experience and there was more to come as I flew to the Global Diving Conference in Portimao / Portugal. Jan, Rick and myself were interviewed by Richie and Vanessa as time was too short in the Netherlands.
Thanks everyone!!